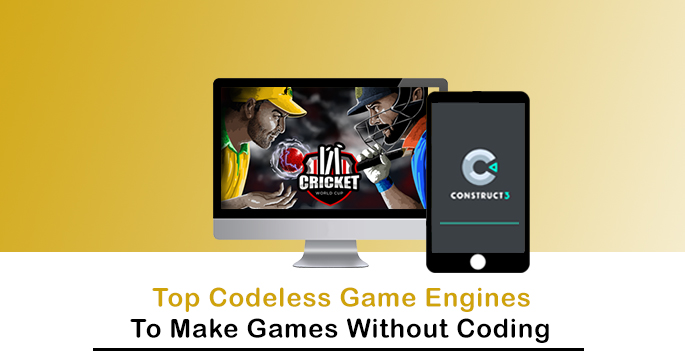 If you are a game development company/game studio or individual game devs, chances are that your team must be using the traditional way of creating games, i.e, by writing loads of code. But did you know that the recent innovations in game development now allow game developers to make games without coding?

Yes, you read it right the first time.

There is a number of tools and game engines that allow modern game developers or basically anyone who wants to have a shot at game development, to create a range of 2D and 3D games without necessarily diving into the code.

If these codeless game engines have got your interest, we highly recommend going through this article where we’ll go over these game engines in detail and share some widely used game engines for 2D and 3D game development.

What are Codeless Game Engines?

We know that you must be thinking that the name is pretty self-explanatory, and hence these engines may not require writing any code at all. But in this context, developing games without coding doesn’t mean writing a whole lot of code to create everything from scratch.

Instead, these codeless game engines offer hundreds of predefined actions and events, where all the developer has to do is map them according to the narrative of the game.

We know you’re curious to know how these no-code game engines work, so let’s dive into it.

Much of the in-game movements, actions, and events that you see in games today come pre-programmed in the engine by the engine developers in the form of code blocks.

And each in-game action or event corresponds to a unique code block, offering several tweakable properties that the game developers can tinker with. Any developer who wants to make games without coding starts with a vast collection of these blocks.

The entire process becomes much faster with these code blocks instead of writing line after line of code. The developer can stack these code blocks according to the narrative, adjust the required properties, and they’re halfway there.

These game engines also offer a range of components such as a scene editor, render engine, physics engine, AI audio, networking, scripting, and animation, that are guaranteed to make the game development a lot smoother. 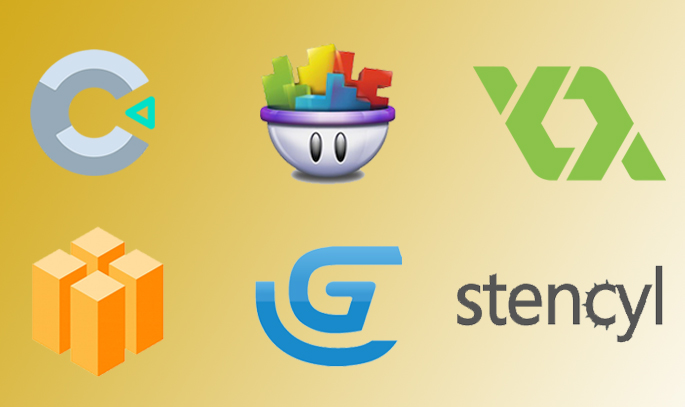 We hope that by now, you must’ve figured out all you needed to know about what these codeless game engines are and how they can help even the lesser technically skilled developers to make games without programming.

Below is our list of the best game engines for developing games without any code.

Developed by Scirra, Construct saw its first release in 2007 and has come a long way ever since.

The latest update to the game engine, Construct 3 introduced several new features and improvements that made it one of the easiest and most powerful game development toolkits on the market.

Some key highlights of the Construct 3 game engine are –

Apart from the standard features offered by game engines, Construct 3 also offers a
visual scripting language that makes creating games without code virtually painless. And to get you started with your first no-code game, Construct 3 comes with plenty of documentation and tutorials.

This is why the best game studios and companies in the world, such as Freak X Apps, a top HTML5 game development company, are all using Construct 3 to deliver the best HTML5 and mobile games that is guaranteed to keep the players hooked.

You can think of Buildbox as your one-stop shop for everything required to create a mobile game without coding. It’s a pretty straightforward game development engine that allows quite literally anyone to hop in and turn their creative ideas into a fully-featured mobile game.

Their standout feature is that they offer no-code game development, which means no worrying about the code or script. Simply pick the asset you need from their smart asset system, finalize your mobile game with live previews, and you’re done.

The engine also takes care of publishing the game on app stores for you along with its monetization.

The game engine is being offered in different variants, a free one with certain limitations and two premium variants that offer much freedom. As for the availability, you can use Buildbox only on Windows and OS X systems, not Linux.

Created by a software engineer at Google, GDevelop is a popular open-source 2D game development engine that claims to be fast, highly extensible, and easy to pick up.

The game engine is freely available and allows you to create anything from platformers to puzzle games, shooters, old arcade-style games, and many other genres.

All of the game development is managed by GDevelop’s visual editors that provide everything from the event-based logic to behaviors to in-game objects and characters.

With GDevelop, you can even start developing games right from your browser, along with desktop, and deploy them later on multiple mainstream platforms, such as Android, iOS, Windows, Mac, Linux, and even the web.

Most people have an issue with GDevelop is that the provided tutorials and documentation aren’t enough but we’re sure that their forum and Discord would be enough to get you started.

GameSalad is another one of those codeless game engines where you can create any game without even touching a line of code.

Thanks to its no-code nature, it has become the perfect tool for students and those new to game development, looking for a way to materialize their creative ideas.

One of its coolest features is the behavior library, which essentially allows game developers to execute and test out complex game behaviors and mechanics without diving into the code. GameSalad has been used to develop games for mainly Android and iOS but the engine can also be used to develop web games.

Taking the game engine out for a spin is pretty straightforward, just go to the creator option and you’re presented with the web version of the game creator.

When it comes to building 2D games for a plethora of platforms, you can’t go wrong with GameMaker.

GameMaker is a widely popular game development engine that has been around for quite some time now and is known for being highly intuitive and simple.

One of its main selling points is the ability to simply drag and drop game components from its vast library to create any game of your choice.

The game engine also offers many other powerful features, such as push notification support for your games, a built-in sound mixer for delivering immersive game sounds, monetization capabilities, and so much more.

People have used GameMaker to create games for a wide range of platforms, such as Windows, Mac, Android, iOS, HTML5, consoles, and many others.

RPG Maker is a series of role-playing game development tools that was first released in Japan in 1992 by a company called ASCII. The game engine gained massive traction there and was later released for other countries in the world.

Some even argue that RPG Maker is still the best tool there is to make RPG games for all major mobile and desktop platforms.

The game engines come packed with all the best game development features, such as a map editor, an extensive character generator, a huge library of game assets, and so much more. And they come with a free trial to give you a taste of its RPG development prowess.

Stencyl is an excellent game development tool that has been marketed as the quickest and easiest way to build game without coding.

Stencyl’s visual scripting approach is one of a kind where it offers simple lego-style code blocks that simply connect together, making the entire development process intuitive.

Like many other codeless game engines on this list, Stencyl also helps you sell your game on popular app stores, embed ads in games, and even gives you the option to sell in-app purchases right from your game.

Apart from deploying your games to common platforms, such as Windows, Mac, Linux, Android, and iOS, you can use Stencyl to create HTML5 games and embed them anywhere on the web.

After successfully making your first html5 game you can get to know some ways to make money with HTML5 Games.

If you are one of those less code-savvy individuals who can’t even write a single line of code but want a shot at game development, then no-code game engines are just the right tool for you.
These game engines can let you or anyone create games without coding using their visual scripting approach.

Although these game engines are pretty self-sufficient for your lightweight game development needs, but at some point, when your game becomes too complex with nodes going all over your screen, debugging and maintenance can become quite challenging.

Thoughts? Do you have any personal favorites? Let us know in the comments!